The Dark Side of ADHD Has a Bright Side 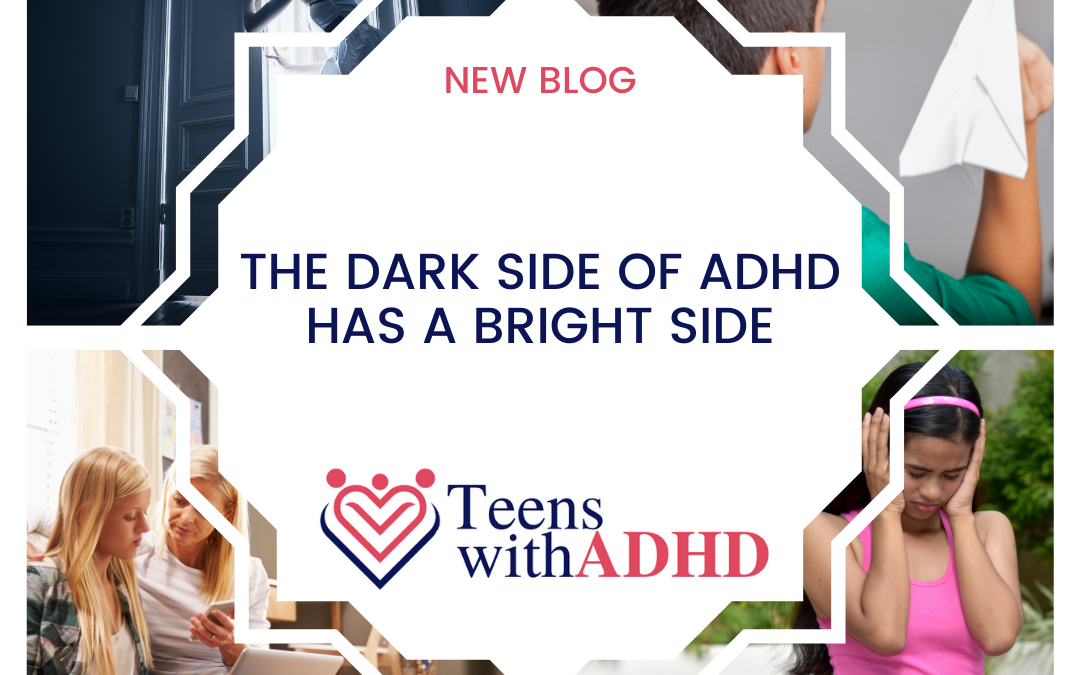 The Dark Side of ADHD Has a Bright Side

I know, I talk a lot about the “small” problems – messy bedrooms, missed chores, trouble getting teens to sleep…

At LovingGrADDitude, I like to focus on the positive aspects of ADHD. We hear so much negative everywhere else that I just want to shine a spotlight on the helpful and the hopeful over here.

But, what about you parents who have bigger things to worry about? To you I say, the dark side of ADHD has a bright side.

ADHD Teenager Out of Control

You know, you parents whose teens are climbing out the window late at night to go who knows where with who knows who?

Those same adorable, fidgety children who were giving you a run for your money just a couple years ago and are now causing havoc and possibly dabbling in dangerous activities have turned into an ADHD meltdown teenager. They come equipped with a driver’s license and less executive functioning than the average teenager.

It’s exactly what you feared would happen when they were only ADHD 8-year-olds who couldn’t find their missing library books to save their life.

And the worst part of it all is that your teens don’t seem to care that they are putting their future in jeopardy and wrecking their grades one late night after another.

Maybe you’re the parent sitting there wondering how to get your kid to care about anything (before they get into real trouble and it’s too late).

I hate to burst your bubble with positivity, but your ADHD teen is acting out because he or she DOES care.

And that’s good because it means there’s hope for them too.

With the end of the school year fast approaching, teens are looking at incomplete assignments, poor grades, AND all the things they need to do at home, so they are overwhelmed and acting out. ADHD brains do not work in a weakened state (overwhelm); only the strongest thought comes through – and it’s usually a negative one.

That weakened state leads good kids into high emotions, lying, impulsivity, depression, self-sabotage. There are so many repercussions of being in a weakened state.

The frustrating fact is that they know what to do; they just can’t access the part of their brain (the 41%) that helps them do it. And until they can master their executive function for the high stress situations, they’re going to continue acting out hardcore.

What can you do to set your ADHD teen up for success? These strategies will help you to see the dark side of ADHD has a bright side.

Remember, they DO care. They just need more tools in their ADHD toolbelt to conquer the negativity and get back on track.

And if you’re not in the right headspace yourself to help them get through this last big push of the school year, send me a message! I can work with your teen in my 1:1 coaching to get them over the end-of-the-year hump, out of summer school, and past the overwhelm that’s triggering their dysfunction.