Collaborative Adolescence: Handing over the Keys to your Teen 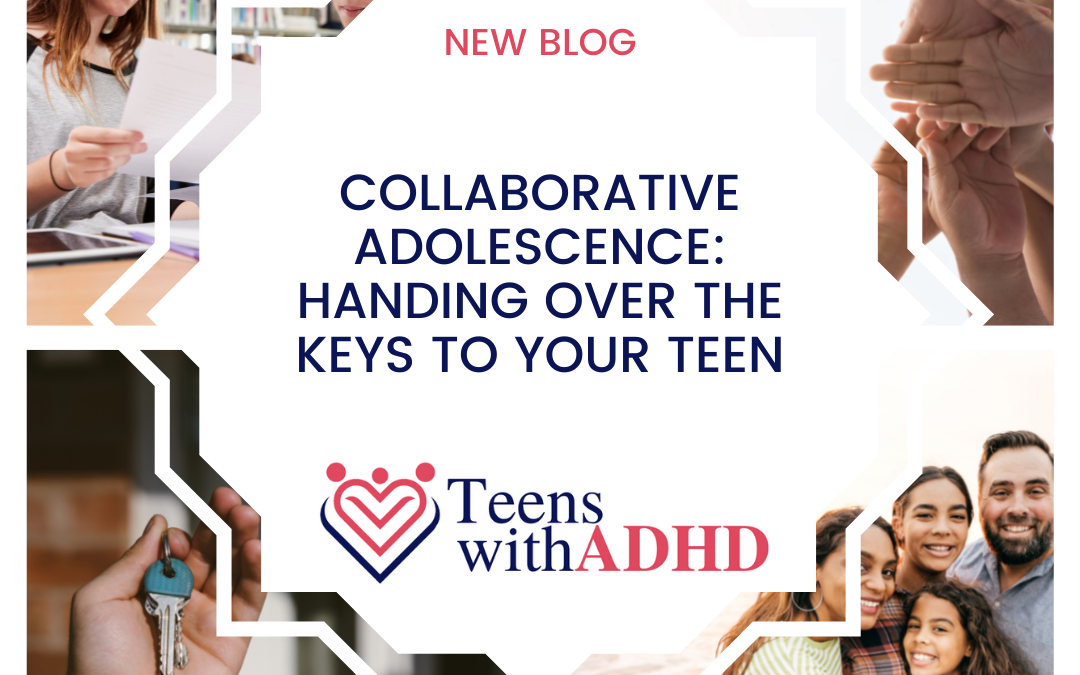 Collaborative Adolescence: Handing over the Keys to your Teen

Surprise! I’m coming backatcha with another blog this month just for you.

Couldn’t it wait until, Kelly?

No! It couldn’t wait because hormones wait for no one. I know…I said the H word.

Maybe your adolescence was like mine and you grew to loathe that word and all of its implications as a teen; but as a parent, I’ve learned to embrace it. You can too.

So… this really couldn’t wait.

Adolescence happens before you know it

In spring of last year, we saw playgrounds yellow taped, all the Chick-Fil-A play places closed,  and frustrated parents wondering how they would keep their kids entertained outside of their usual get togethers.

And while some parents were waiting patiently for the day the tape would come down, other, slightly more mature parents were about to find out that it wouldn’t matter if the tape came down or not‒their kids had moved on to bigger and different things.

The yellow tape symbolized the end of childhood and the beginning of a new stage of life for kids and parents alike.

For most of us, it meant more time spent on electronics . Don’t get me wrong. I enjoy a good movie and scrolling on my phone now and then. I get the appeal.

I even believe electronics can be a great reward for keeping up with their responsibilities (a reward that they can choose on their own)–more on this later.

But for our teens with ADHD, it presents another layer of distraction, another hurdle to get over.

And it’s tempting (isn’t it?) to want to take the phone away, to scrap the video games, to send them back to the playground to do kid stuff again.

But Teens with ADHD have different needs

I’m not in the parenting stage of diapers and sensory toys anymore. My kids don’t get excited about the kiddie toys in the drive-thru these days. They’re simply older; hormones have entered stage right.

But I am very familiar with that moment when parents realize the ADHD management strategies that worked for their kids are not going to work for their teens.

They know it when:

Even though my teens had a mild transition to adolescence compared to some of the examples above, in my own family, I soon realized…

I couldn’t control everything for my teens or take responsibility for their mistakes.

I needed to understand how they processed information.

Some of the strategies like front-loading  would still work, but I couldn’t be as hands-on as I was when I taught them how to tie their shoes.

They were READY to be their own problem solvers. And they needed a different level of parenting from me  or they were going to really struggle.

Change is hard, especially when there is neurodiversity in the mix. But before you start writing sad poems about the last time you saw your child go down the big slide at the park, let me shine a little light on what kind of change adolescence CAN bring if you’re willing to make some adjustments to your parenting style.

Your teens can set their own goals and choose their own consequences and rewards. This is how they learn to be self-motivated self-sufficient adults. You get to take a step  back and watch them succeed or try again.

Your teens can communicate with you on a whole new level. You don’t have to repeat yourself!

Your teens will be active members of your family. Everyone participates = more time for you!

You can really enjoy these teen years, maybe even more than childhood.

What is my teen’s role during adolescence?

So it sounds like you get to take more of a backseat and let your teens take the wheel, right? Sort of… Parenting teens is more about the collaboration now.

But I know you are asking yourself, “How do I get them to participate?”

The truth is, the teens are already participating in the adolescence, but your role to guide and encourage them as you pass the baton of responsibility is of the utmost importance.

And if the parents miss the point or keep a tight grip on the steering wheel, teens might become disheartened and stop communicating and participating in the family.

A story of missing the good changes…

Recently I spoke with a teen that I’ve been working with for several years. He has come so far in taking responsibility for his future and his self-discipline. He has a strict regimen that he sticks to every day to stay on track with his goals.

His grades are finally excellent. He is taking charge and driving his car (literally and figuratively) in the direction of his dreams. He has taken full responsibility for his life.

But his parents can’t see the progress this year. They are questioning his commitment because he hasn’t met some of their surface level expectations.

For him? It should be an easy fix. Clean the room. Take out the trash. Check all the boxes.

But the real problem is that his parents don’t approve of his road map. They have other expectations for his future that don’t light his fire. They are trying to steer the car from the passenger’s seat, and it’s heartbreaking.

That type of parenting in adolescence does not produce a peaceful and happy relationship between parents and teen.

And as a parent, if you don’t learn early on how to ease off the steering wheel, you won’t see the wonderful kind of changes that I know are possible for your family. Your kids won’t be happy on the playground anymore because they were made for something bigger.

How can I have a collaborative relationship with my ADHD teen?

You know I would never leave you without a resource, so I want to personally invite you to my Collaborative Parent Academy.

It’s a step by step roadmap walking you through how to pass the baton of responsibility to your teen for life beyond adolescence and it will give you the tools you need to collaborate and work with your teen to uncover their best practice toward independence.

You ready to join the academy?

Check it out right here.